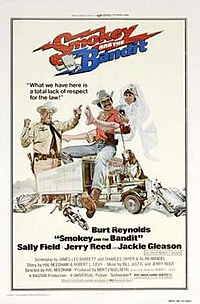 Smokey and the Bandit is a 1977 American road action comedy film starring Burt Reynolds, Sally Field, Jackie Gleason, Jerry Reed, Pat McCormick, Paul Williams and Mike Henry. The directorial debut of stuntman Hal Needham, the film follows Bo "Bandit" Darville (Reynolds) and Cledus "Snowman" Snow (Reed), two bootleggers attempting to illegally transport 400 cases of Coors beer from Texarkana to Atlanta. While the Snowman drives the truck carrying the beer, the Bandit drives a Pontiac Trans Am to distract law enforcement (called blocking) and keep the attention off the Snowman. During their run, they are pursued by Texas county sheriff Buford T. Justice (Gleason). Smokey and the Bandit was the second highest-grossing domestic film of 1977 with $300 million against a budget of $4.3 million (only Star Wars made a higher gross that year, earning $775.5 million).

Wealthy Texan Big Enos Burdette (McCormick) and his son, Little Enos (Williams), seek a trucker willing to bootleg Coors beer to the Southern Classic in Atlanta for their refreshment; Big Enos has sponsored a racer in Atlanta's Southern Classic and wants to celebrate in style when he wins. They find local legend Bo "Bandit" Darville at a roadeo at Lakewood Fairgrounds and offer him $80,000 to pick up 400 cases of Coors from Texarkana (the closest place it could be legally sold at that time) and bring it back to Atlanta in 28 hours. Despite the fact that the Burdettes have previously offered the same challenge to other truckers who have all failed, as they were all caught, Bandit takes the bet and recruits his partner Cledus "Snowman" Snow to drive the truck, while Bandit drives a black Pontiac Trans Am bought on an advance from the Burdettes as a "blocker" to divert attention away from the truck and its illegal cargo. They arrive in Texarkana an hour ahead of schedule, load the truck and head back toward Atlanta. Immediately upon starting the second leg of the run, Bandit is stopped by Carrie ("Frog") (Field), a runaway bride who hitches a ride, inadvertently making Bandit a target of Sheriff Buford T. Justice, a career Texas lawman whose witless son, Junior (Henry), was to have been Carrie's bridegroom. Buford, with Junior in tow, pursues Bandit all the way to Georgia to get Carrie back, ignoring his own jurisdiction. Various mishaps cause his cruiser to disintegrate on the way. Bandit's antics attract more attention from police throughout Dixie, while Snowman barrels on toward Atlanta with the contraband beer, but they are helped along the way by many colorful characters via CB radio who thwart the police's actions. Neither Buford nor any other lawmen know of Snowman's illegal manifest, while Bandit is likewise unaware that Buford is chasing him because of Carrie. Moments after crossing back into Georgia, Snowman is narrowly rescued by Bandit after being stopped by a Georgia State Patrol motorcycle trooper and state and local police escalate their pursuit with more cruisers, roadblocks and even a police helicopter to track Bandit's movements. Discouraged by the unexpected mounting attention and with just four miles to go until the finish line, Bandit is ready to give up, but Snowman, who was initially skeptical that they could get the job done, refuses to listen and takes the lead, smashing through the police roadblock at the fairgrounds' main entrance. They make it back during the race with only 10 minutes left, but instead of taking the payoff, Carrie and Bandit accept a 'double-or-nothing' offer from Little Enos: a challenge to run up to Boston and bring back clam chowder in 18 hours. They quickly escape in one of Big Enos' 13 Cadillacs as police flood the racetrack. When they pass Buford's badly damaged cruiser by the side of the road, Bandit gets on the CB and first directs him to Big and Little Enos, but then, out of respect, he reveals his true location: over Buford's left shoulder; Buford continues his chase, leaving Junior behind with his cruiser still falling apart as the end credits roll.