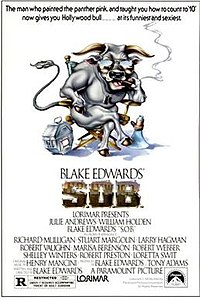 The story is a satire of the film industry and Hollywood society. The main character, Felix Farmer (Richard Mulligan), is a phenomenally successful film producer who has just made the first major flop of his career, to the dismay of his movie studio, resulting in the loss of his own sanity. Felix attempts suicide four times: He attempts to die of carbon monoxide poisoning in his car, only to have it slip into gear and drive through the side of his garage, down a sand dune and into the Pacific Ocean. He then attempts to hang himself from a rafter in an upstairs bedroom, only to fall through the floor, landing on a poisonous Hollywood gossip columnist standing in the living room below. Subsequently, he tries to gas himself in his kitchen oven, but is prevented from carrying out his intent by two house guests with other things on their mind.