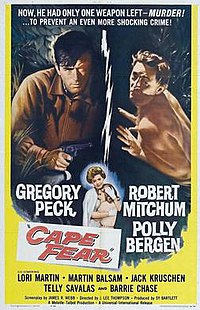 Cape Fear is a 1962 American noir psychological thriller film starring Gregory Peck, Robert Mitchum, and Polly Bergen. It was adapted by James R. Webb from the 1957 novel The Executioners by John D. MacDonald. The picture was directed by J. Lee Thompson from storyboards devised by original director Alfred Hitchcock and released on April 12, 1962. The film concerns an attorney whose family is stalked by a criminal he helped to send to jail. The supporting cast features Martin Balsam, Telly Savalas and Barrie Chase.

In Southeast Georgia, Max Cady is released from prison after serving an eight-year sentence for rape. He promptly tracks down Sam Bowden, a lawyer whom he holds personally responsible for his conviction because Sam interrupted his attack and testified against him. Cady begins to stalk and subtly threaten Bowden's family. He kills the Bowden family dog, though Sam cannot prove Cady did it. A friend of Bowden, Police Chief Mark Dutton, attempts to intervene on Bowden's behalf, but he cannot prove Cady guilty of any crime.