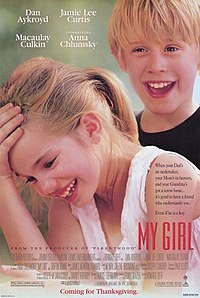 My Girl is a 1991 American coming-of-age comedy-drama film directed by Howard Zieff, written by Laurice Elehwany, and starring Dan Aykroyd, Jamie Lee Curtis, Macaulay Culkin, and Anna Chlumsky in her first role in a major motion picture that tells the story of an 11-year-old girl living in Madison, Pennsylvania, during the summer of 1972. The film's title refers to the classic 1964 song of the same name by The Temptations, which is also featured in the film's end credits. A book, based on the film, was written by Patricia Hermes. The film grossed $121,489,799 on a budget of $17 million. A sequel, My Girl 2, was released in 1994.

Vada Sultenfuss is an 11-year-old girl living in Madison, Pennsylvania, during the summer of 1972. Her father, Harry, is a widowed funeral director who does not understand Vada, so he constantly ignores her. Their house operates as the town funeral home, which has led Vada to develop an obsession with death. She regularly cares for her paternal grandmother, 'Gramoo', who has Alzheimer's disease and whose wandering mind also affects Vada. Phil, Vada's uncle, lives nearby and frequently stops by to help the family. Vada is a hypochondriac and spends time with her best friend, Thomas J. Sennett, an unpopular boy of the same age who suffers from various allergies. Other girls tease them about being more than just friends. Thomas J. often accompanies Vada when she visits the doctor, who assures her that she is not sick. Vada befriends Shelly DeVoto, the new makeup artist at Harry's funeral parlor, who provides her with guidance. Vada also develops a crush on her fifth-grade school teacher, Mr. Bixler, and hears about an adult poetry writing class that he is teaching. Vada steals some money from the cookie jar in Shelly's trailer to cover the cost of the class. When advised to write about what is in her soul, it emerges that Vada fears that she killed her mother.