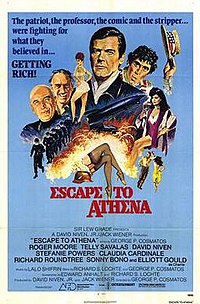 Escape to Athena is a 1979 British adventure comedy war film directed by George P. Cosmatos. It stars Roger Moore, Telly Savalas, David Niven, Stefanie Powers, Claudia Cardinale, Richard Roundtree, Sonny Bono and Elliott Gould. The film is set during the Second World War on a German-occupied Greek island. The music was composed by Lalo Schifrin. It was filmed on location on the island of Rhodes.

In 1944, Allied prisoners at a POW camp on an unnamed Greek island are forced to excavate ancient artifacts. The camp Commandant, Major Otto Hecht, a former Austrian antiques dealer, is sending some of the valuable pieces to his sister living in Switzerland. However the prisoners have discovered that they will be sent to other camps once the finds run out, so they arrange to keep "discovering" the same pieces. While Hecht is content to sit out the war, the SS Commandant of the nearby town, Major Volkmann, brutally enforces discipline, including reprisal executions of civilians.