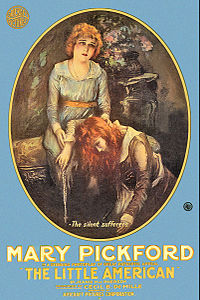 The Little American is a 1917 American silent romantic war drama film directed by Cecil B. DeMille. The film stars Mary Pickford (who also served as producer) as an American woman who is in love with both a German and a French soldier during World War I. A print of the film is housed at the UCLA Film and Television Archive and has been released on DVD.

Karl Von Austreim (Jack Holt) lives in America with his German father and American mother. He admires and woos a young woman, Angela More (Mary Pickford). As she is celebrating her birthday on the Fourth of July of 1914, she receives flowers from the French Count Jules De Destin (Raymond Hatton). They are interrupted by Karl, who also gives her a present, and they compete for Angela's favor. Karl is unexpectedly summoned to Hamburg to join his regiment, and Angela is crushed when he announces he has to leave. The next day, Angela reads in the paper the Germans and French are at war and 10,000 Germans have been killed already.