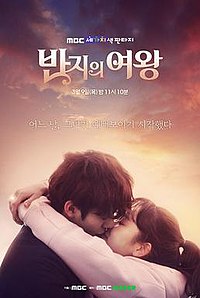 Queen of the Ring is a 6-episode South Korean television drama starring Kim Seul-gi and Ahn Hyo-seop. The drama is one of the "Three Color Fantasy" drama trilogy by MBC and Naver. The drama's color is Gold, It's previously occupied by Romance Full of Life (Green). It will air on Naver TV Cast every Tuesday at 0:00 (KST) starting from March 7, 2017 and on MBC every Thursday at 23:10 (KST) starting from March 9, 2017.

Story about a girl Nan-hee (Kim Seul-gi) who does not believe in herself because she feels she does not look as pretty as others. One day she receives a ring which holds a family secret. Due to the magical ring, she gets Se-gun (Ahn Hyo-seop) who's a handsome guy but has a cold-blooded personality to see her as his ideal type.