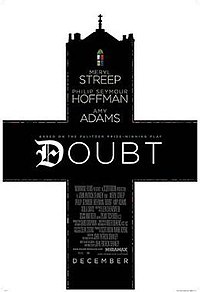 In 1964 at a Catholic church in The Bronx, New York, Father Brendan Flynn gives a sermon on the nature of doubt, noting that it, like faith, can be a unifying force. Sister Aloysius, the strict principal of the church's parish school, becomes concerned when she sees a boy pull away from Flynn in the school courtyard. She instructs her Sisters to be alert to suspicious activity in the school.