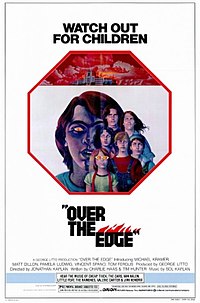 Over the Edge is an American coming-of-age crime drama film directed by Jonathan Kaplan and released in May 1979. The film, based on actual events, had a limited theatrical release but has since achieved cult film status. It was Matt Dillon's film debut.

In the fictional isolated planned community of New Granada, east of Denver, Colorado, Carl Willat and his friends Richie White, Claude Zachary, and Claude's younger brother Johnny hang out at "the Rec" (Recreation Center), the only place for adolescents to recreate together, supervised by Rec counselor Julia Vogel.