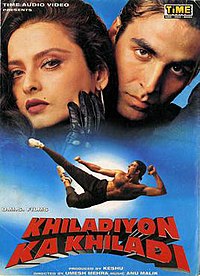 Khiladiyon Ka Khiladi (English: Player of Players) is a 1996 Indian Hindi-language action film starring Rekha in her first villain role, Akshay Kumar, Raveena Tandon and former WWF wrestlers "Crush" and Brian Lee as "The Undertaker". It was the 6th highest-grossing movie of the year 1996. It was the fourth installment in the Khiladi (film series).

The film is about a deadly game of survival in the ruthless world of crime and sleaze. A criminal don, Maya (Rekha), hosts illegal wrestling matches in U.S (New York) and has the full support of the local Police Commissioner. Ajay Malhotra has relocated to US and has started his own orchestra with the help of some of his friends.