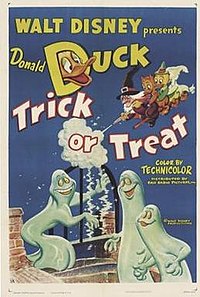 Trick or Treat is a 1952 animated short film produced by Walt Disney Productions and released by RKO Radio Pictures. The cartoon, which takes place on Halloween night, follows a series of pranks between Donald Duck and his nephews with Witch Hazel. The film was directed by Jack Hannah and features the voices of Clarence Nash as Donald and his nephews, and June Foray as Hazel.