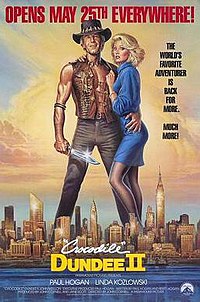 A year has passed since the events of Crocodile Dundee, and Mick Dundee and Susan "Sue" Charlton are living happily together in New York. Although Mick's ignorance of city life is a hazard when he attempts to continue his former lifestyle, like blast fishing in Manhattan's waters, Sue's writing has made him a popular public figure. He later goes to work for Leroy Brown, a mild-mannered stationery salesman trying to live up to his self-perceived 'bad guy in the streets' image.