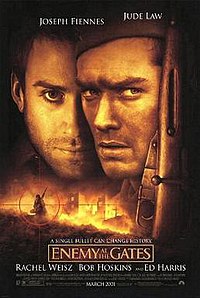 Enemy at the Gates is a 2001 war film directed, co-written and produced by Jean-Jacques Annaud, based on William Craig's 1973 nonfiction book Enemy at the Gates: The Battle for Stalingrad, which describes the events surrounding the Battle of Stalingrad in the winter of 1942 and 1943. The screenplay was written by Annaud and Alain Godard. The film's main character is a fictionalized version of sniper Vasily Zaytsev, a Hero of the Soviet Union during World War II. It includes a snipers' duel between Zaytsev and a Wehrmacht sniper school director, Major Erwin König.

A young Vasily Zaitsev is taught how to shoot with a hunting rifle by his grandfather, in the Ural Mountains. The timeline then shifts to 1942, following the invasion of the Soviet Union the year before. Zaitsev is now a soldier in the Red Army and finds himself on the front lines of the Battle of Stalingrad. Forced into a suicidal charge without a rifle, Vasily barely survives the onslaught.