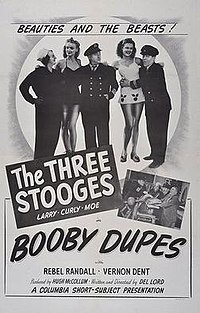 Booby Dupes is a 1945 short subject directed by Del Lord starring American slapstick comedy team The Three Stooges (Moe Howard, Larry Fine and Curly Howard). It is the 84th entry in the series released by Columbia Pictures starring the comedians, who released 190 shorts for the studio between 1934 and 1959.

The Stooges are fish peddlers (similar to their roles in 1940's Cookoo Cavaliers) who decide to cut out the middleman by catching the fish themselves. They then go about purchasing fishermen uniforms and a boat. While searching for their wardrobe, Curly manages to swipe a navy captain's uniform from the same guy (Vernon Dent) whose girl (Rebel Randall) Curly decides to overly flirt with.