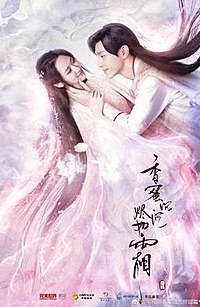 Ashes of Loveis a 2018 Chinese television series based on the novel Heavy Sweetness, Ash-like Frost (2009) by Dian Xian. It stars Yang Zi as Jin Mi and Deng Lun as Xu Feng in the lead roles. The series premiered on Jiangsu TV starting August 2, 2018.

Zifen the Flower Deity dies after giving birth to a daughter, Jinmi. She foresaw a prophecy that her daughter will suffer a great love trial within the first ten thousand years of her life. Therefore, before dying she gives Jinmi a magical pellet that prevents her from feeling and expressing romantic love. Jinmi grows up in the Flower Realm, living as a low-level immortal. Her peaceful life is interrupted when she encounters the Fire Deity, Xufeng, who lives in the Heavenly Realm. Persuading him to take her to see the Heavenly Realm, Jinmi meets Xufeng's half-brother, the Night Deity Runyu. She also meets Princess Sui He, who is a close ally of Xufeng's mother, the Holy Empress, and as a result, Sui He believes she will one day marry Xufeng. Both Xufeng and Runyu take an interest in Jinmi and due to the pellet, Jinmi becomes unwittingly involved in a love triangle between the two brothers, who grow to become rivals due to Jinmi and the machinations of the Holy Empress. Jinmi also learns of her true nature as a child of the late Flower Deity and the current Water Deity.