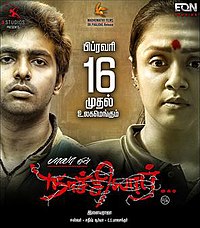 Naachiyaar is a 2018 Indian Tamil-language crime film written, produced and directed by Bala. The film featured Jyothika in the titular role, with G. V. Prakash Kumar and Ivana in other leading roles. The film tells the tale of the police working to uncover the truth after a young man is accused of sexually assaulting his minor girlfriend. Featuring music composed by Ilaiyaraaja and cinematography by Eashwar, the film began production during March 2017 and was released on 16 February 2018.

Naachiyaar (Jyothika) is a tough policewoman in Chennai who is put in charge of solving an underage rape case. She tracks down a pregnant Arasi (Ivana), the victim, from her uncle and his goons who plan to get her an abortion. Although Naachiyaar saves Arasi, her uncle and his friends escape and go into hiding. Meanwhile, Naachiyaar's partner, Feroz arrests the suspect, Kaathu (G.V. Prakash Kumar). He is then sent to a juvenile home, where he tells his story to one of the wardens, who is soft-hearted towards him.