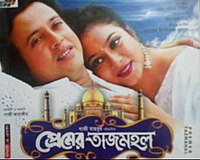 "Robyn" (Riaz) and "Liza" (Shabnur) these young duo love each other with their heart and soul. But Robyn does not know about Liza's background same as him Liza does not know about Robyn. So,bafterward there was a big problem with their Religion. Robyn was a Muslim and Liza was a Christian. When they take a step of love marriage Liza went to Church. But Robyn by listening to her sayings laughs and thought she was joking with him and Robyn says their marriage will be in a Kazi Office as role of Islam. Liza was shocked when she learned that he was Muslim also Robyn was shocked knowing she was Christian. They then separate and try to forget each other, but first love is not easily forgotten. So, they are back with an alternative decision as love is love, in love do not involve any religion. So, your religion is great for you also mine to me. One day, their family knows about this situation and takes action. Robyn's father "Raihan Chowdhury" (Abul Hayat) and Liza's father "Abraham Dikosta" (Wasimul Bari Rajib) start a family war due to previous business relations. In the meantime, Robyn and Liza ready for die but not put out of their mind.