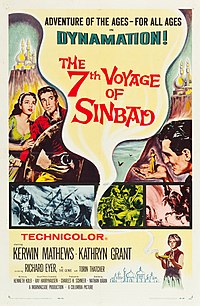 Sinbad the Sailor and his ship's crew make landfall on the island of Colossa, where they encounter Sokurah the magician fleeing a giant cyclops. Though he escapes, Sokurah loses a magic lamp to the creature. Sinbad refuses his desperate pleas to return to Colossa because Parisa, Princess of Chandra, is aboard. Their coming marriage is meant to secure peace between her father's realm and Sinbad's homeland, Baghdad.