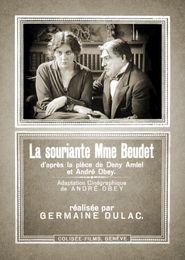 La Souriante Madame Beudet (The Smiling Madame Beudet) is a short French impressionist silent film made in 1923, directed by pioneering avant-garde cinema director Germaine Dulac. It stars Germaine Dermoz as the protagonist Madame Beudet, who has grown tired of her husband's foolish antics and Alexandre Arquillière as Monsieur Beudet. It is considered by many to be one of the first truly "feminist" films. It tells the story of an intelligent woman trapped in a loveless marriage.