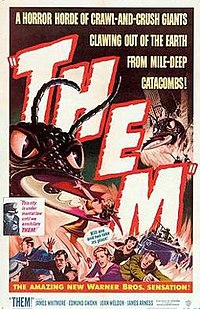 Them! is a 1954 American black-and-white science fiction monster film from Warner Bros. Pictures, produced by David Weisbart, directed by Gordon Douglas, and starring James Whitmore, Edmund Gwenn, Joan Weldon, and James Arness. The film is based on an original story treatment by George Worthing Yates, which was then developed into a screenplay by Ted Sherdeman and adaptation by Russell Hughes.

New Mexico State Police Sgt. Ben Peterson and Trooper Ed Blackburn discover a little girl wandering the desert, near Alamogordo, in shock and in a catatonic state. They take her to a nearby vacation trailer, located by a spotter aircraft, where they find evidence that the little girl had been there when it was attacked and nearly destroyed. It is later discovered that the trailer was owned by an FBI Special Agent named Ellinson, on vacation with his wife, son, and daughter; the other members of the girl's family remain missing. Now in an ambulance, the child briefly reacts to a pulsating high-pitched sound from the desert by sitting up in the stretcher. No one else notices her reaction, and she lies back down when the noise stops.