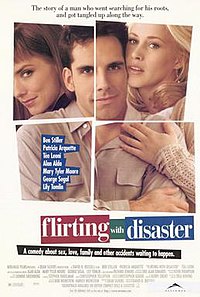 Flirting with Disaster is a 1996 American black comedy film written and directed by David O. Russell about a young father's search for his biological parents. It stars Ben Stiller, Patricia Arquette, Téa Leoni, Alan Alda, Mary Tyler Moore, George Segal, Lily Tomlin and Richard Jenkins. It was screened out of competition in the Special Screenings section at the 1996 Cannes Film Festival.

Mel Coplin and his wife, Nancy, live in New York, near Mel's neurotic, Jewish, adoptive parents, Ed and Pearl Coplin. Mel and Nancy have just had their first child, and Mel won't decide on a name for their son until he can discover the identity of his biological parents. When Tina, an adoption agency employee, locates his biological mother's name in a database, Mel decides to meet his mother personally.