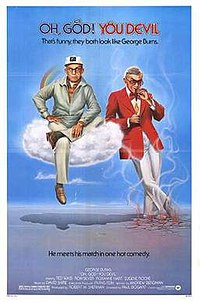 Oh, God! You Devil is a 1984 American comedy film starring George Burns, Ted Wass, Ron Silver and Roxanne Hart. Directed by Paul Bogart and produced by Robert M. Sherman. The screenplay is by Andrew Bergman. Oh, God! You Devil is the third and final installment in the Oh, God! film series following Oh, God! (1977) and Oh, God! Book II (1980), based on the 1971 novel of the same title by Avery Corman.

Burns plays the dual roles of both God and the devil. The devil—Harry O. Tophet—(Tophet is a Hebrew word for "Hell") is a lively character, taking pleasure in petty acts of PG-rated malice, such as making a waiter fall into a pool.