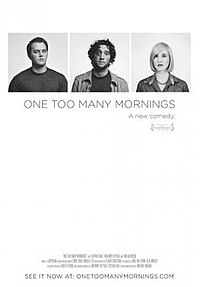 One Too Many Mornings is a 2010 independent comedy film directed by Michael Mohan, who co-wrote the film with Anthony Deptula and Stephen D.B. Hale. Deptula and Hale also star in the film alongside Tina Kapousis, Red State Update's Jonathan Shockley, and the Actors' Gang's V.J. Foster. Its title references Bob Dylan's song One Too Many Mornings, and an original theme song with the same title was written and performed for the movie by Brad Breeck of The Mae Shi. Unlike many mumblecore films, the film plays out entirely in black and white, and was shot over the span of 2 years.

Peter has just run away from his girlfriend of 5 years, seeking solace in his estranged friend from high school, Fischer.