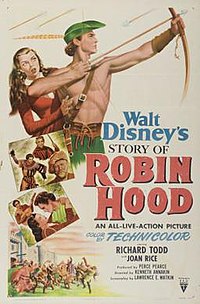 The Story of Robin Hood and His Merrie Men 1952

The Story of Robin Hood and His Merrie Men is a 1952 action adventure film produced by Walt Disney Productions and RKO Radio Pictures based on the Robin Hood legend, made in Technicolor and filmed in Buckinghamshire, England. It was written by Lawrence Edward Watkin and directed by Ken Annakin. It is the second of Disney's complete live-action films, after Treasure Island (1950), and the first of four films Annakin directed for Disney.

Young Robin Hood, in love with Maid Marian, enters an archery contest with his father at the King's palace. On the way home his father is killed by henchmen of Prince John. Robin takes up the life of an outlaw, gathering together his band of merry men with him in Sherwood Forest, to avenge his father's death and to help the people of the land whom Prince John is over taxing.