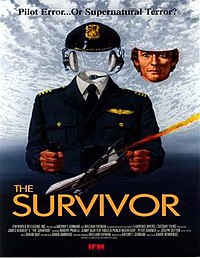 The Survivor is a 1981 Australian horror thriller film directed by David Hemmings and starring Robert Powell and Jenny Agutter, based on a novel of the same name by James Herbert. It saw the final film appearance of actor Joseph Cotten.

A pilot survives the crash of his Boeing 747-200, unhurt despite all of its 300 passengers dying in the accident. With no memories of the accident, he starts to suffer strange supernatural visions, guiding him to suspect that something happened in the crash and that the accident maybe wasn't an accident.