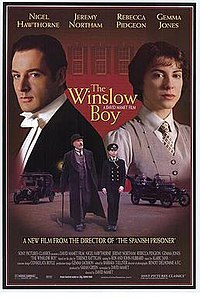 The Winslow Boy is a 1999 period drama film directed by David Mamet and starring Nigel Hawthorne, Rebecca Pidgeon, Jeremy Northam and Gemma Jones. Set in London before World War I, it depicts a family defending the honour of its young son at all cost. The screenplay was adapted by Mamet based on Terence Rattigan's 1946 dramatic play The Winslow Boy.

It is Christmas 1911 and Arthur Winslow, a London banker, is making final preparations for a dinner to seal the engagement between his daughter Catherine, an outspoken supporter of the cause of women's suffrage, and Captain John Watherstone. The family and guests are toasting the upcoming marriage when Arthur discovers that his youngest son Ronnie, a 13-year-old cadet at the Royal Naval College, Osborne, is unexpectedly home. Ronnie has been accused of the theft of a postal order. An internal enquiry, conducted without notice to his family and without benefit of representation, finds him guilty and Mr. Winslow is "requested to withdraw" his son from the college (the formula of the day for expulsion). Ronnie proclaims his innocence and his father believes him—enough so that he demands an apology from the College. When the college refuses to reinstate Ronnie, Arthur decides to take the matter to court. With the help of his daughter and Desmond Curry, a solicitor and friend of the family, Mr. Winslow decides to hire the most highly sought after barrister in England at the time, Sir Robert Morton, known also to be a shrewd opposition Member of Parliament.