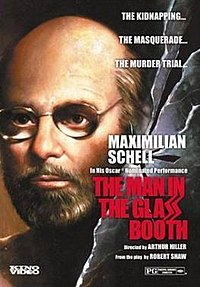 The Man in the Glass Booth is a 1975 American drama film directed by Arthur Hiller. The film was produced and released as part of the American Film Theatre, which adapted theatrical works for a subscription cinema series. The screenplay was adapted from Robert Shaw's 1967 novel and 1968 stage play, both of the same name. The novel was the second in a trilogy of novels, preceded by The Flag (1965), and followed by A Card from Morocco (1969).

Arthur Goldman is Jewish and a Nazi death camp survivor. Now a rich industrialist, he lives in luxury in a Manhattan high-rise. He banters with his assistant Charlie, often shocking him with his outrageousness and irreverence about aspects of Jewish life. One day, Israeli secret agents kidnap Goldman and take him to Israel for trial on charges of being a Nazi war criminal. Goldman's trial forces his accusers to face not only his presumed guilt, but theirs as well.