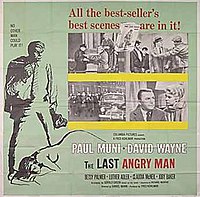 The Last Angry Man is a 1959 drama film that tells the story of a television producer who profiles the life of a physician. It stars Paul Muni (in his last film appearance), David Wayne, Betsy Palmer, Billy Dee Williams (in his film debut), and Godfrey Cambridge.

As the fiercely dedicated general practitioner who tries to help the sick, the poor, and the unfortunate in his decrepit neighborhood, Dr. Sam Abelman is a testy old man who faces life without compromise and Woodrow Thrasher is a troubled television executive fighting to preserve his career.