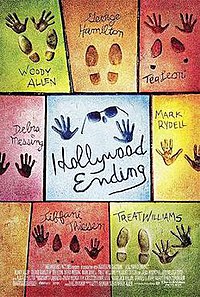 Hollywood Ending is a 2002 American comedy film written and directed by Woody Allen, who also plays the principal character. It tells the story of a once-famous film director who suffers hysterical blindness due to the intense pressure of directing.

Val Waxman is a once-prestigious film director who now directs television commercials. When he is thrown off his latest effort (a deodorant commercial filmed in the frozen north of Canada), he desperately seeks a real movie project.