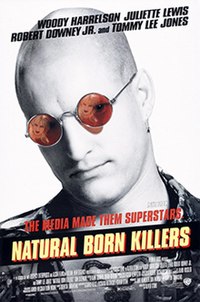 Mickey Knox and his wife Mallory stop at a diner in the New Mexico desert. A duo of rednecks arrive and begin sexually harassing Mallory as she dances by a jukebox. She initially encourages it before beating one of the men viciously. Mickey joins her, and the couple murder everyone in the diner, save one customer, to whom they proudly declare their names before leaving. The couple camp in the desert, and Mallory reminisces about how she met Mickey, a meat deliveryman who serviced her family's household. After a whirlwind romance, Mickey is arrested for grand theft auto and sent to prison, he escapes and returns to Mallory's home. The couple murders Mallory's sexually abusive father and neglectful mother, but spared the life of Mallory's little brother, Kevin. The couple then have an unofficial marriage ceremony on a bridge.