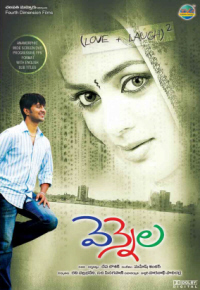 Vennela is a 2005 Telugu romantic comedy film written and directed by Deva Katta, starring Raja and Parvati Melton as well as Sharwanand and Ravi Varma. Vennela was well received among the young, urban audiences and south Indian students in USA mostly from Andhra Pradesh, and Telangana, India. 90% of the film was shot in Michigan, United States. The American university setting was shot at Wayne State University main campus in Detroit and Oakland University in Rochester. Only 10% of the film was shot at City College Hyderabad. The film grossed 5.3 crore at the box office.

Pavani (Parvati Melton) is an independent woman, who wants to pursue higher education in USA. She has been in a committed relationship with Ritesh (Sharvanand), her classmate and son of a millionaire. Ritesh was an intelligent and popular guy in college. He draws hostility, jealousy, and enmity with his college mate Sayeed (Ravi Varma), who was also interested in Pavani, albeit secretly. Sayeed introduces him to smoking, drinking and college politics. Ritesh loses himself in those activities which disappoints Pavani. She tries to make him responsible but fails. She decides to break up with him several times but is convinced to change her mind by him. At last she decides to break up and moves to United States to pursue higher education and to keep away from him.