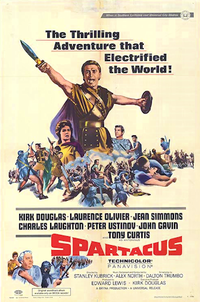 Spartacus is a 1960 American epic historical drama film directed by Stanley Kubrick, written by Dalton Trumbo, and based on the 1951 novel of the same title by Howard Fast. It is inspired by the life story of Spartacus, the leader of a slave revolt in antiquity, and the events of the Third Servile War. It stars Kirk Douglas in the title role, Laurence Olivier as Roman general and politician Marcus Licinius Crassus, Peter Ustinov as slave trader Lentulus Batiatus, John Gavin as Julius Caesar, Jean Simmons as Varinia, Charles Laughton as Sempronius Gracchus, and Tony Curtis as Antoninus.

In the first century BC, the Roman Republic has slid into corruption, its menial work done by armies of slaves. One of these, a proud and gifted Thracian named Spartacus, is so uncooperative in his position in a mining pit that he is sentenced to death by starvation. By chance, he is displayed to unctuous Roman businessman Lentulus Batiatus, who – impressed by his ferocity – purchases Spartacus for his gladiatorial school, where he instructs trainer Marcellus to not overdo his indoctrination because he thinks "he has quality". Amid the abuse, Spartacus forms a quiet relationship with a serving woman named Varinia, whom he refuses to rape when she is sent to "entertain" him in his cell. Spartacus and Varinia are subsequently forced to endure numerous humiliations for defying the conditions of servitude.