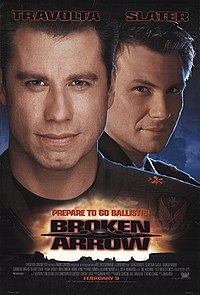 Broken Arrow is a 1996 American action-thriller film directed by John Woo, written by Graham Yost, and starring John Travolta, Christian Slater, and Samantha Mathis. The film's main themes include the theft of two American nuclear weapons, the attempts of U.S. military authorities to recover them, and the feud between Travolta and Slater's characters. The film was a commercial success despite mixed reviews.

Major Vic "Deak" Deakins and Captain Riley Hale, pilots in the United States Air Force (USAF), are assigned to a secret exercise flying a stealth bomber with two B83 nuclear bombs. After successfully evading Air Force radar, Deakins suddenly attacks Hale and ejects him from the plane. Deakins releases the bombs without activating them, then reports that Hale has gone rogue. He ejects from the plane, leaving it to crash in a Utah state park.