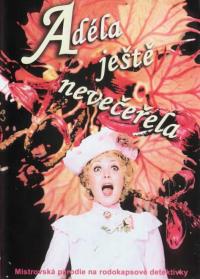 It is the turn from the nineteenth to the twentieth century. The Prague police commissar Ledvina asked the famous New York detective Nick Carter, who is on a visit to Prague, for assistance to solve the strange case of a missing dog. Mysterious murder cases happen during the investigations, done by the malicious botanist Baron von Kratzmar and his carnivorous plant Adele. Von Kratzmar kidnapped his victims, bound them and whenever he played a gramophone with the melody "Schlafe, mein Prinzchen" (a lullaby by Bernhard Flies but previously associated with Wolfgang Amadeus Mozart) it is the time for Adele to awaken and eat her victims for dinner. Baron von Kratzmar considered himself a misjudged genius and wanted to take revenge on one of his former professors. He called himself "the Gardener" a notorious criminal, who Nick Carter thought had died in the swamps years ago. With the help of bizarre inventions, Ledvina and Carter succeed in catching von Kratzmar and delivering him to the legal authorities.