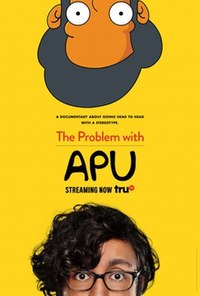 The Problem with Apu is a 2017 documentary film written by and starring comedian Hari Kondabolu and produced and directed by Michael Melamedoff. It focuses on the character Apu Nahasapeemapetilon, an Indian immigrant in the animated sitcom The Simpsons who, for a period, was the only figure of South Asian heritage to appear regularly on mainstream U.S. television. The film explores encounters with negative stereotypes, racial microaggressions, and slurs against people of Indian and South Asian heritage disseminated through the character.