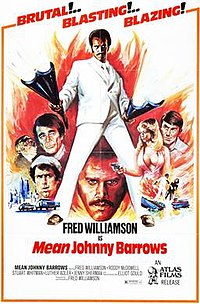 Johnny Barrows (played by Fred "The Hammer" Williamson) is dishonorably discharged from the army for punching out a fellow officer. Shipped back home to Spiddal, Johnny promptly gets mugged and hauled in by some racist cops for being drunk. Unable to secure gainful employment, Johnny finds himself on the soup line (with a cameo from Elliott Gould) and down on his luck.