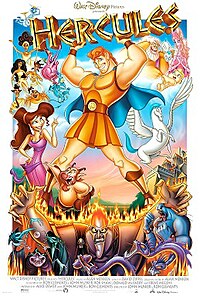 Hercules is a 1997 American animated musical fantasy comedy film produced by Walt Disney Feature Animation for Walt Disney Pictures. The 35th Disney animated feature film and the eighth animated film produced during the Disney Renaissance, it is loosely based on the legendary hero Heracles (known in the film by his Roman name, Hercules), the son of Zeus, in Greek mythology. The film was directed by John Musker and Ron Clements, both of whom also produced the film with Alice Dewey Goldstone. The screenplay was written by Musker, Clements, Donald McEnery, Bob Shaw, and Irene Mecchi. Featuring the voices of Tate Donovan, Danny DeVito, James Woods, and Susan Egan, the film follows the titular Hercules, a demigod with super-strength raised among mortals, who must learn to become a true hero in order to earn back his godhood and place in Mount Olympus, while his evil uncle Hades plots his downfall.

In Ancient Greece, the gods Zeus and Hera have a son named Hercules. While the other gods are joyful, Zeus' wicked brother Hades plots to overthrow Zeus and rule Mount Olympus. Through the Fates, Hades learns that in eighteen years, a planetary alignment will allow him to free the Titans to conquer Olympus, but only if Hercules does not interfere. Hades sends his imp minions, Pain and Panic, to murder Hercules, providing them with a potion that can strip a god of immortality. The two kidnap the baby, take him down to the valley and feed him the potion. However, before Hercules drinks the last drop, two farmers pass nearby and startle the demons, causing them to drop the bottle. Hercules is stripped of immortality but retains his god-like strength. Pain and Panic attempt to murder the baby by turning into snakes, but Hercules easily overpowers them. The pair decide not to report their failure to Hades.