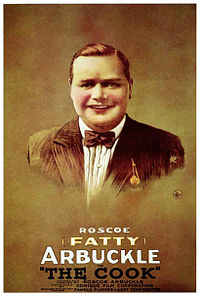 The Cook is a 1918 American two-reel silent comedy film written by, directed by, and starring Roscoe "Fatty" Arbuckle and featuring Buster Keaton and Al St. John. The movie is a slapstick comedy and focuses on goings-on at a high-end restaurant with Arbuckle as the Cook and Keaton as the Waiter.

Fatty is the head chef at the "Bull Pup" restaurant where Keaton serves as the head waiter. One evening while service is in full flow Keaton and Fatty entertain the crowd with their dancing (despite breaking most of the plates and bottles in the restaurant in the process). The fun is soon spoiled when a vagrant (St. John), referred to as "Holdup Man" in the film's credits, comes in and begins ruining everyone's good time and dancing with the waitress (Alice Lake) against her will. Fatty, Keaton and the manager are no match for Holdup Man but he is subsequently scared off by Luke, Fatty's dog. Later, Fatty and Keaton join a pair of gentlemen in the restaurant for a big plate of spaghetti, not being able to replicate the correct way of eating it they resort to their own methods of eating one string at a time and cutting the pasta with scissors to make it shorter.