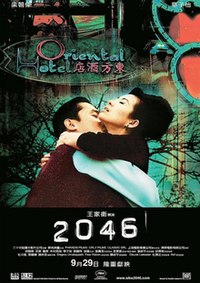 2046 is a 2004 Hong Kong romantic drama film written and directed by Wong Kar-wai. It is a loose sequel to Wong's films Days of Being Wild (1990) and In the Mood for Love (2000). It follows the aftermath of Chow Mo-wan's unconsummated affair with Su Li-zhen in 1960s Hong Kong but also includes some science fiction elements and makes frequent references to the date of 24 December or Christmas Eve, on which many significant events in the film occur.

The film is the third chapter of a shared story that began with Days of Being Wild and continued with In the Mood for Love.