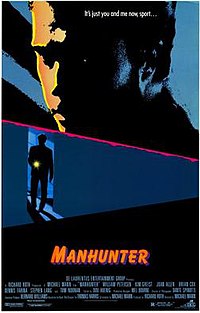 Manhunter is a 1986 American neo-noir psychological thriller film written and directed by Michael Mann and based on the 1981 novel Red Dragon by Thomas Harris; it stars William Petersen as FBI profiler Will Graham. Also featured are Tom Noonan as serial killer Francis Dollarhyde, Dennis Farina as Graham's FBI superior Jack Crawford, and Brian Cox as incarcerated killer Hannibal Lecktor. The film focuses on Graham coming out of retirement to lend his talents to an investigation on Dollarhyde, a killer known as the Tooth Fairy. In doing so, he must confront the demons of his past and meet with Lecktor, who nearly counted Graham among his victims.

Will Graham is a former FBI criminal profiler who has retired following a mental breakdown after being attacked by a cannibalistic serial killer, Dr. Hannibal Lecktor, whom he captured. Graham is approached at his Florida home by his former FBI superior Jack Crawford, who is seeking help with a new serial killer case. Promising his wife that he will do nothing more than examine evidence and not risk physical harm, Graham agrees to visit the most recent crime scene in Atlanta, where he tries to enter the mindset of the killer, dubbed the Tooth Fairy by the police for the bite marks left on his victims.