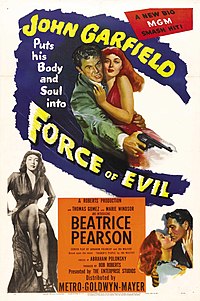 Force of Evil is a 1948 American crime film noir starring John Garfield and directed by Abraham Polonsky. It was adapted by Polonsky and Ira Wolfert from Wolfert's novel Tucker's People. Polonsky had been a screenwriter for the boxing film Body and Soul (1947), in which Garfield had also played the male lead.

Lawyer Joe Morse (Garfield) works for a powerful gangster, Tucker, who wishes to consolidate and control the numbers racket in New York City. This requires absorbing many smaller outfits, one of which is run by Morse's older brother Leo (Thomas Gomez). One relishes his life in the underworld, the other is disgusted by it and seeks to minimize its impact. Even seeking to soften things for Leo things go wrong for Joe, and tragedy befalls both.