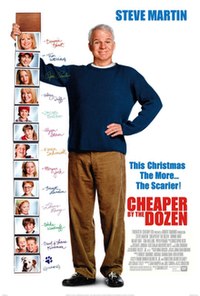 Cheaper by the Dozen is a 2003 American family comedy film directed by Shawn Levy. It is a remake of the 1950 film of the same name. Both films were inspired by the semi-autobiographical book Cheaper by the Dozen by Frank Bunker Gilbreth Jr. and his sister Ernestine Gilbreth Carey. The 2003 version stars Steve Martin, Bonnie Hunt, Hilary Duff, Tom Welling, and Piper Perabo.

Tom and Kate Baker have raised their twelve children: Nora, Charlie, Lorraine, Henry, Sarah, Jake, Mark, Jessica, Kim, Mike, Kyle, and Nigel, in Midland, Illinois. Kate narrates throughout the film and hopes to publish the book she has written telling about the family's story. Tom receives a job offer from Shake McGuire to coach football at his alma mater in Evanston. Tom accepts the offer, but the children oppose his decision to move and are unwilling to leave their friends. The atmosphere at the Bakers' new house becomes tense, and Charlie and Mark are bullied at their respective schools.