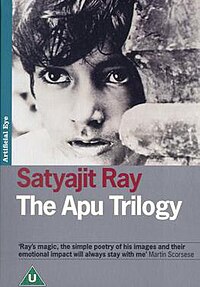 The Apu Trilogy comprises three Indian Bengali-language drama films directed by Satyajit Ray: Pather Panchali (1955), Aparajito (1956) and The World of Apu (1959). The original music for the films was composed by Ravi Shankar.

The three films comprise a "coming of age" narrative in the vein of a bildungsroman; they describe the childhood, education and early maturity of a young Bengali named Apu (Apurba Kumar Roy) in the early part of the 20th century.