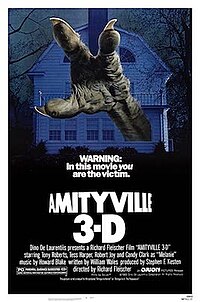 Amityville 3-D (also known as Amityville III: The Demon) is a 1983 supernatural horror film directed by Richard Fleischer and starring Tony Roberts, Tess Harper, Robert Joy, Candy Clark, Lori Loughlin and Meg Ryan. It is the third film based in the Amityville Horror series, it was written by David Ambrose, under the pseudonym William Wales. It was one of a spate of 3-D films released in the early 1980s, and was the only Orion Pictures film filmed in the format.

After he exposes a pair of con artists with his partner Melanie (Candy Clark) in the infamous 112 Ocean Avenue house in Amityville, journalist John Baxter (Tony Roberts) is persuaded to purchase the house by real estate agent Clifford Sanders (John Harkins). While preparing the house for John, Clifford investigates footsteps in the attic. He is locked in the room, where a swarm of flies attack and kill him. John believes Clifford died of a stroke, even after Melanie shows him some photos she took of the real estate agent before his death which depict him as a rotting corpse.