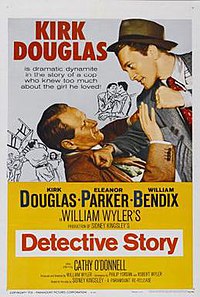 Detective Story is a 1951 film noir directed by William Wyler that tells the story of one day in the lives of the various people who populate a police detective squad. It features Kirk Douglas, Eleanor Parker, William Bendix, Cathy O'Donnell, and George Macready. Both Lee Grant and Joseph Wiseman perform in their film debuts. The movie was adapted by Robert Wyler and Philip Yordan from the 1949 play of the same name by Sidney Kingsley. It was nominated for four Academy Awards, including Academy Award for Best Director for Wyler, Best Actress for Parker, and Best Supporting Actress for Grant.

A shoplifter (Lee Grant) is arrested in New York City, and her booking occurs at the 21st police precinct. Outside, Det. Jim McLeod (Kirk Douglas) is sharing a romantic moment with his wife Mary (Eleanor Parker), and he discusses the children he would like to have. McLeod returns to the precinct to process a young embezzler named Arthur Kindred (Craig Hill).