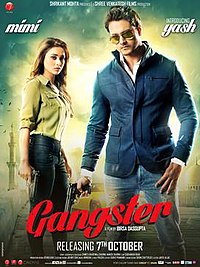 Gangster is an Indian Bengali language romantic thriller film directed by Birsa Dasgupta under the banner of Shree Venkatesh Films. The film stars debutant Yash Dasgupta with Mimi Chakraborty in leading roles. The film is a romantic thriller where Yash plays the role of a Gangster. The film has been shot in Istanbul, Turkey. The film released on 7 October 2016.

The movie begins in present time, on the anniversary of Kabir and Ruhi. While Kabir shops for his wife and is returning home, he is shot by four masked gangsters. Just before falling out a fifth person shoots him. He is taken to hospital and a shocked Ruhi arrives to see him. The film then takes a flashback to how Kabir became Guru, the gangster.