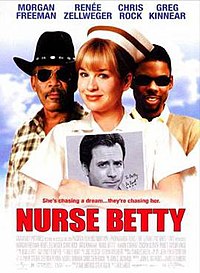 Nurse Betty is a 2000 American black comedy film directed by Neil LaBute and starring Renée Zellweger as a Kansas waitress who suffers a nervous breakdown after witnessing her husband's murder, and starts obsessively pursuing her favorite soap actor (Greg Kinnear), while in a fugue state. Morgan Freeman and Chris Rock play the hitmen who killed her husband and subsequently pursue her to Los Angeles.

In the small Kansas town of Fair Oaks, diner waitress Betty is a fan of the soap opera A Reason to Love. She has no idea that her husband Del, a car salesman, is cheating on her and having a sexual affair with another woman. She also doesn't know that her husband supplements his income by selling drugs. When Betty calls to ask about borrowing a Buick LeSabre for her birthday, her husband tells her to take a different car. Unknown to her, drugs are hidden in the LeSabre's trunk.