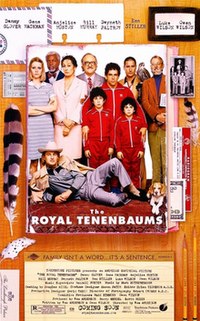 The Royal Tenenbaums is a 2001 American comedy-drama film directed by Wes Anderson and co-written with Owen Wilson. It stars Danny Glover, Gene Hackman, Anjelica Huston, Bill Murray, Gwyneth Paltrow, Ben Stiller, Luke Wilson, and Owen Wilson. Ostensibly based on a nonexistent novel, and told with a narrative influenced by the writing of J.D. Salinger, it follows the lives of three gifted siblings who experience great success in youth, and even greater disappointment and failure in adulthood. The children's eccentric father Royal Tenenbaum (Hackman) leaves them in their adolescent years, then returns to them after they have grown, falsely claiming he has a terminal illness. He works on reconciling with his children and ex-wife (Huston).

Royal Tenenbaum explains to his three adolescent children, Chas, Margot, and Richie, that he and his wife, Etheline, are separating. Each of the children achieved great success at a young age. Chas is a math and business genius, from whom Royal steals money. Margot, who was adopted, was awarded a grant for a play that she wrote in the ninth grade. Richie is a tennis prodigy and artist who expresses his love for Margot through paintings. Royal regularly takes Richie on outings without the other children. Eli Cash is the Tenenbaums' neighbor and Richie's best friend.