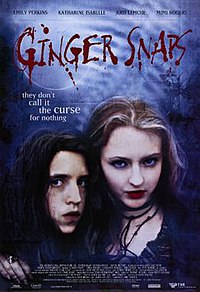 Ginger Snaps is a 2000 Canadian horror film directed by John Fawcett and starring Emily Perkins and Katharine Isabelle. The film focuses on two teenage sisters who have a fascination with death. It is the first installment in the Ginger Snaps series, followed by Ginger Snaps 2: Unleashed and Ginger Snaps Back: The Beginning. Its reputation includes a large cult following and significant critical acclaim.

In Bailey Downs, a rash of dog killings has been occurring. Brigitte and Ginger Fitzgerald are teenage sisters who harbor a fascination with death and, as children, formed a pact to move out of the suburb or die together by the age of 16. One night, while on the way to kidnap a dog owned by school bully Trina Sinclair, Ginger begins her first period. The scent of blood results in the girls being attacked by the creature responsible for the maulings. The creature bites and wounds Ginger, and Brigitte rescues her. As the girls flee, the creature is run over by a van belonging to Sam Miller, a local drug dealer.