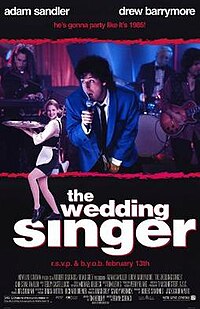 The Wedding Singer is a 1998 American romantic comedy film directed by Frank Coraci, written by Tim Herlihy, and produced by Robert Simonds for million and grossed $80.2million in the United States and $123.3million worldwide.. The film stars Adam Sandler, Drew Barrymore, and Christine Taylor. It tells the story of a wedding singer who falls in love with a waitress.

Robbie Hart is a wedding singer in Ridgefield, New Jersey in 1985, whose own wedding to his fiancée Linda is approaching. He meets and befriends Julia Sullivan, a new waitress at the reception hall where he works, and promises to sing at her wedding, though her fiancé, businessman and bond investor Glenn Gulia, has yet to set a date.